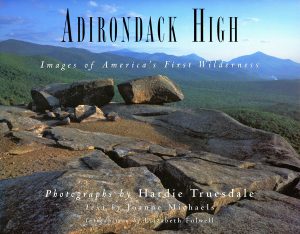 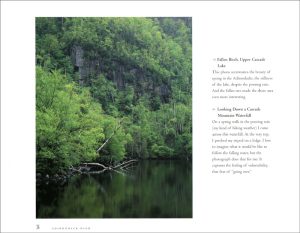 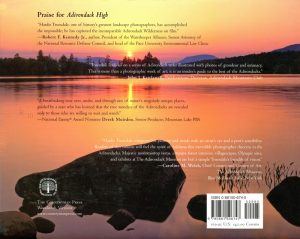 “Hardie Truesdale, one of history’s greatest landscape photographers, has accomplished the impossible; he has captured the incomparable Adirondack Wilderness on film.”
—Robert F. Kennedy Jr., President of the Waterkeeper Alliance, Senior Attorney of the National Resource Defense Council, and head of the Pace University Environmental Law Clinic

“A breathtaking tour over, under, and through one of nature’s singularly unique places, guided by a man who has learned that the true wonders of the Adirondacks are revealed only to those who are willing to wait and watch.”
—National Emmy Award Nominee Derek Muirden, Senior Producer, Mountain Lake PBS

Adirondack High is a celebration of America’s first wilderness, the Adirondack Park, created in 1892 out of a patchwork of public and private lands. Roughly the size of the state of Vermont, the park has neither an entrance gate nor an admission fee, and contains six million acres seamed with more than 2000 miles of trails—the nation’s largest trail system. There are thousands of lakes, 1800 miles of rivers, the High Peaks (46 mountains more than 4000 feet high), countless trees, and rare vegetation that thrive under adverse conditions.

Hardie Truesdale has brought together some of the places that make the Adirondacks so spectacular. He works as a painter would, carefully seeking out each scene with his 50 pounds of large-format camera equipment. His commitment, patience, and, ultimately, his vision are unique. The images are not just beautiful, they capture the spirit of the Adirondacks. (There are driving/hiking directions to all the sites photographed in an appendix at the back of the book.)

Hardie Truesdale’s photography has been represented by galleries across the country. National Geographic Books, the Sierra Club, the Audubon Society, Mohonk Preserve, and The Nature Conservancy have all featured his work. He lives in Gardiner, New York.

128 pages, with an introduction by Elizabeth Folwell.

Be the first to review “Adirondack High” Cancel reply